A day at the beach with Voltora

There is something undoubtably special about a beach photo shoot. I have spoken to so many people about their equestrian ambitions, and “galloping along a beach on my horse” has come up on numerous occasions… But what about “galloping along a beach under my horse”? Now that I don’t hear so often, but it is what Voltora do; as they are stunt riders!

On the 24th July, the sun was shining, as I prepared to go to Ynyslas – the location I frequently use for beach photo shoots – which is about 2 hours from my home in Shropshire. It was to be the first beach photo shoot of the year (with a group ride in the morning and Voltora’s photo shoot in the afternoon). It was set to be a busy day! About half an hour in to my drive, clouds made an appearance, as I drove deeper in to the Welsh countryside, the clouds became darker and gloomier overhead. Once I reached Machynlleth (a Welsh town in the county of Powys) about 30 minutes from the beach, it began to rain. I will confess, I was a little concerned at this point, as the idyllic beach photo shoot doesn’t usually involve rain. I continued to drive towards the coast, feeling rather deceived by the weather forecast.

The magical feeling never fades, as I take the right hand junction in the village of Tre’r-ddol; it is the first moment you get a sense of being near the ocean. From there, you know you are about five minutes away from the beach, and the excitement builds (can you tell I love a beach photo shoot?). Now, on this journey, the skies were not blue, but I was thankful the rain had stopped. Shortly after this, I arrived at Ynyslas. The car park isn’t really a car park at all, it is a section of beach designated for vehicles. As I approached the entrance, the tarmac turned in to sand and to my right, horse lorries and trailers were lined up in a row, with exited people surrounding them, ready for the group ride.

As the riders took to the beach, the sky was still overcast, but no one’s spirits could be dampened. It was to be a day of fun, amongst friends, and smiles filled everyone’s faces, which made for perfect photos. A number of riders had never ridden on a beach before, which called for some comic photographs, as well as wonderful galloping shots like the one below. 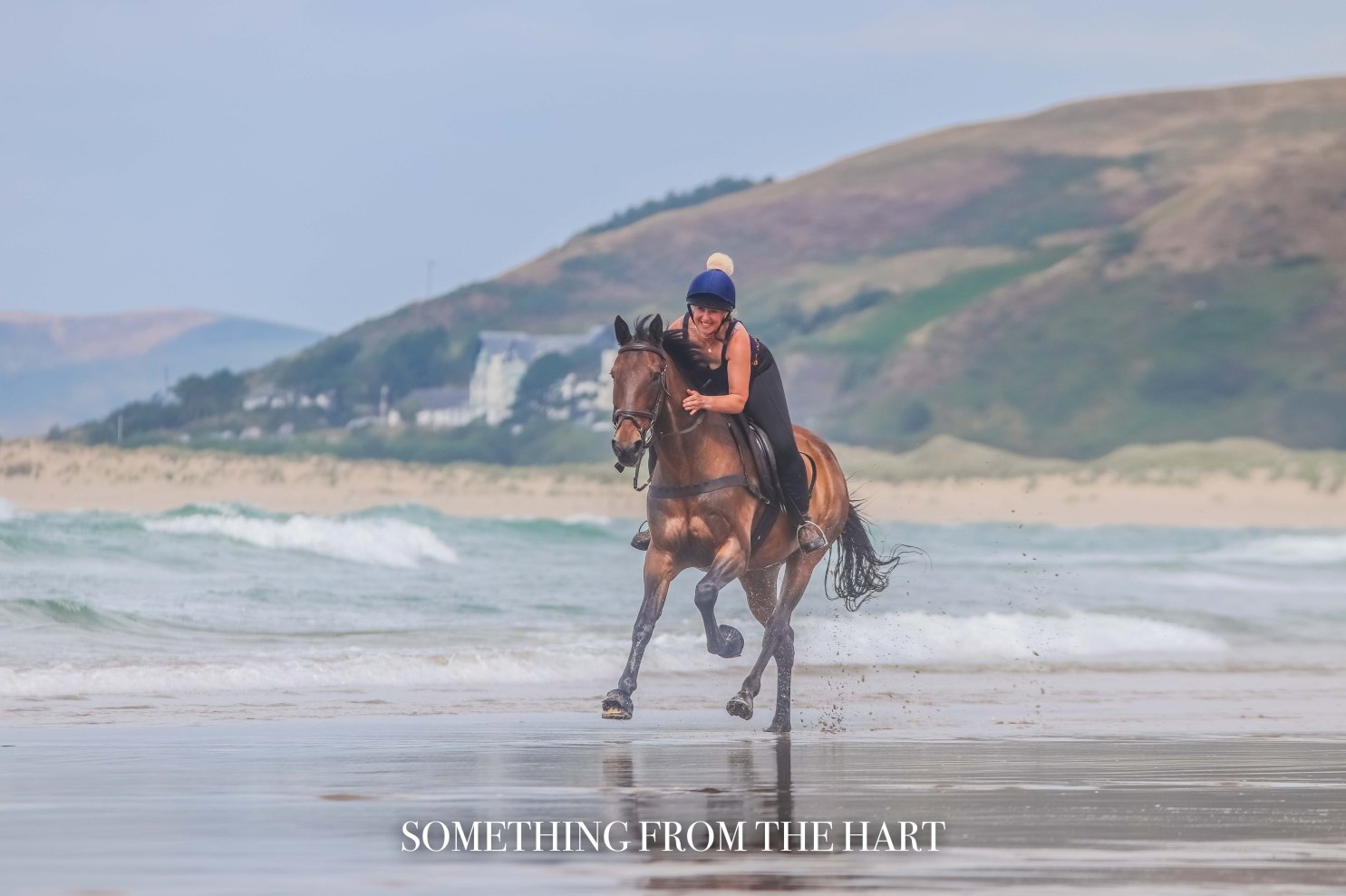 After the group ride, I had a little break, for lunch and a quick run through of the images from the morning. During this time, the sun decided to make an appearance, just in time for the Voltora riders’ (Georgia and Gregory’s) arrival.

Neither of the horses had been to the beach before, so we began the session with them getting used to their new surroundings – something they adapted to very quickly. People on the beach began to watch as Georgia and Gregory trotted along the water’s edge, some even got their phones out to take videos of them. I had worked with Voltora prior to this photo shoot and knew what to expect, once they were warmed up, however, I am sure the members of the public were pretty gobsmacked when they started performing their stunts… I mean, it isn’t every day that you see someone doing this on the beach…

Spectacular is an understatement, for this incredible performance.

After the images taken on the seafront, Georgia put this glistening dress on and we headed to the sand dunes. The image shown below has to be one of my all time favourites, as, although it was taken on the Welsh Coast, it could have so easily been captured in the Sahara Desert. As you can see here, the atmospheric sky was a blessing, adds to the mood.

At the end of the photo shoot, in the car park, with a backdrop of the estuary and the Welsh Mountains, Georgia did some stunning liberty work. This was the first time I have ever photographed a horse on the beach wearing absolutely no tack, and what a magical moment it was. With such a deep connection Embrujo, the lovely horse pictured here, stayed right by Georgia’s side and did a number of beautiful tricks followed by a well-earned roll. Now, a beach trip for me wouldn’t be complete without some fish and chips. So, a stop in Machynlleth on my way home completed the perfect day. It is a day I will remember fondly and I look forward to returning to Ynyslas soon.

To book your photo shoot please view my calendar of availability